Translations of this lay report:
German by Prof. Markus Schuelke

Leigh syndrome is a brain condition that usually affects young children (adult onset is very rare) and is caused by a variety of different genetic problems. Originally described in 1951 by Dr Denis Leigh, this syndrome typically involves symmetrical damage to both sides of the brain in areas known as the basal ganglia, thalamus, brainstem and spinal cord. The overarching aims of this series of virtual ENMC workshops were to discuss the genetic causes, disease course and development of therapies for this severe and progressive disorder.

Following three virtual conferences on the Leigh Syndrome Spectrum (LSS) held on 16th October and 4th December 2020 (https://www.enmc.org/download/258th-enmc-international-workshop-on-leigh-syndrome-spectru/) and 9 July 2021 (https://www.enmc.org/download/genetic-epidemiology-and-clinical-trial-readiness-in-encephalomyopathy-of-leigh-syndrome-spectrum/), a fourth and final hybrid workshop was held in Amsterdam on the weekend of 25-27 March 2022. Six participants (three of the organisers: Bertini, Rahman and Schiff), two scientists (Prigione and Rotig) and an industry representative (Klein) attended the workshop in person, and the other attendees participated online.

The hybrid meeting was opened by Enrico Bertini (Rome, Italy), who welcomed participants and gave an overview of the main objectives of this final hybrid workshop. Day 1 was devoted to a further discussion of the genetics of LSS. Shamima Rahman (London, UK) started the first session with a summary of the NIH-funded ClinGen curation of gene-disease associations of 113 nuclear and mitochondrial DNA-encoded genes and LSS, including the internationally agreed consensus definition of LSS. Next, Holger Prokisch (Munich, Germany) presented an update on GENOMIT, an international collaborative eRARE-funded project, and Daria Diodato (Rome, Italy) provided an overview of published national registries of LSS, including registries from Italy, UK, USA, France, Czech Republic, Australia, and Japan.

The workshop then focussed on issues concerning the disease mechanisms and diagnosis of LSS. Agnes Rötig (Paris, France) discussed the difficulties of variable clinical presentation of genetic variants in the SDHB gene and ongoing transcriptomic (RNA) studies aiming to unravel the underlying mechanisms. Next, Alessandra Pennisi (Paris, France) provided an update on a project aiming to bring together clinical and imaging features of LSS not caused by primary mitochondrial disease. This was an international collaborative project that began after the second virtual workshop of this series. Anna Ardissone (Milan, Italy) then discussed the changing diagnostic approach to LSS, moving from muscle biopsies to genetics as the first line, which was followed by a lively discussion including all members of the consortium. Day 1 concluded with a presentation from Rita Horvath (Cambridge UK) who described Treatabolome, a published meta-analysis of treatments in LSS.

Day 2 commenced with a review of biomarkers for primary mitochondrial diseases including LSS from Anu Suomalainen-Waartiovara (Helsinki, Finland). Alessandro Prigione (Dusseldorf, Germany) then presented his work modelling LSS in patient-derived brain organoids, and Markus Schuelke (Berlin, Germany) discussed the results of pharmacological screening of repurposed drugs – those drugs licensed for a different purpose but now investigated for potential use in mitochondrial disease – in induced pluripotent stem cells (iPSCs) also derived from patients affected by LSS.

The final session of Day 2 considered the patient journey. Zarazuela Zolkipli-Cunningham (Philadelphia, USA) reported on using her Mitochondrial Myopathy Composite Assessment Tool (MM-COAST) to quantify motor deficits in Leigh syndrome and how clinical outcomes are being collected at the Children’s Hospital of Philadelphia for the LSRP natural history study. Faye Wylie (Leigh Network, UK) and her mother Amanda then gave a moving account of the lived experience of Leigh syndrome through childhood into adult life and recited a poem written by Faye. Finally, Phil Yeske (UMDF, USA) discussed patient registries from the Patient Advocacy Group (PAG) viewpoint and introduced MitoSHARE, a global research database with multi stakeholder oversight and discussed the importance of collaboration.

Day 3 began with a presentation from Markus Schuelke about engaging with the European Medicines Agency (EMA) to take forward a compound identified in his iPSc drug repurposing screen into a formal clinical trial for LSS. Alison Maguire and Katie Waller (Lily Foundation, UK) then discussed the role of PAGs in LSS, again emphasising the importance of multidisciplinary collaboration, and described the process by which international care guidelines were developed for Duchenne muscular dystrophy, which could provide useful lessons for LSS. Day 3 concluded with a summary of the workshop by Manuel Schiff (Paris, France) and a roundtable discussion of the next steps.

During this series of workshops, international expert members of the Leigh syndrome consortium met with the objective of collecting genetic and natural history data to inform future clinical trials. These virtual and hybrid meetings have been an excellent opportunity to update and deepen our knowledge of the genetic causes and natural history of Leigh syndrome, promoting international research and collaborative studies, including fruitful discussions about prospective natural history studies and clinical trials. Collaborations arising from these meetings include an international collaborative project collating clinical and imaging features of non-primary mitochondrial disease causes of LSS, the potential use of a shared MRI and MRS protocol across multiple international centres and plans for delivering the LSRP prospective natural history study globally.

ENMC office will create a link to the NMD Elsevier page, once your full paper is published in NMD. 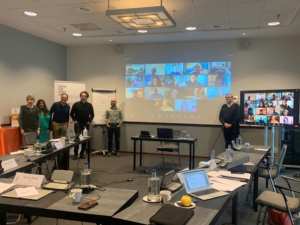 Formation of a European network to initiate a European data collection, along... Muscle Imaging in Facioscapulohumeral Muscular Dystrophy (FSHD): relevance for...
Scroll to top