News
You are here: Home / Advances in Myotubular Myopathy

The ENMC consortium on advances in myotubular myopathy (MTM) held its 6th Workshop in Naarden, the Netherlands, the weekend from 26-28th September 2003. It was attended by 19 active participants from Australia, Finland, France, Germany, Italy, Switzerland, the United Kingdom and the USA. The meeting opened with an overview on the genotype-phenotype correlation on 340 families and 196 different mutations in the myotubularin gene (MTM1) in order to predict severity of manifestations with the type of mutation and domain position. Most were private mutations but 7 mutations were more recurrent and most were found in exons 4-8-12. Direct exon sequencing improves molecular diagnosis in relation to other screening methods. Manifesting carriers of MTM1 are rare (3 out of 43 studied).
In addition to mutation analysis the protein status can be studied by immunoprecipitation but not yet routinely.
A whole morning was concentrated on studies that try to unravel the subcellular localization and the function of MTM1 and myotubularin related proteins (MTMRs), highlighting the specific substrates, the catalytic activities and the crystallographic structure of MTMR2. Preliminary observations show that MTMRs are expressed ubiquitously but their amount of expression varies differently among tissues. Two MTMRs are responsible for 2 forms of demyelinating Charcot-Marie-Tooth neuropathies (CMT) type 4B1 (MTMR2) and CMT4B2 (MTMR13/SBF2), showing characteristic myelin outfoldings at the nerve biopsy. The knock out mouse model of MTM1 showed many similarities with the human disorder. There was a moderate growth deficiency at birth and progressive muscle weakness together with appearance of muscle fibers showing central nuclei. Fibers were normally differentiated and showed no significant necrosis and regeneration, but fiber atrophy with structural disorganization was found. This model seems promising for therapeutic strategies.
A review on clinical and histopathological aspects of autosomal dominant and autosomal recessive centronuclear myopathies was presented. Following the chromosomal localization of a canine model to chromosome 2 and searching on the syntenic human region on chromosome 10, a candidate gene coding for a tyrosine phosphatase-like protein was chosen but yielded no mutations in some autosomal dominant and recessive patients with centronuclear myopathy. Moreover a genome wide search on a few autosomal dominant families indicated a new chromosomal locus but further confirmation is required adding other informative families. In patients with no mutations in MTM1 and in the myotonic dystrophy gene a candidate gene approach is on-going to find new disease genes for centronuclear myopathies.
A few patients with pathogenetic mutations in the MTM1 gene showed an overgrowth syndrome which may be related to abnormally increased levels of IGFs. The workshop consortium agreed to collect serum from MTM1 patients to confirm these trophic factor abnormalities.

An extended report of the meeting will be submitted for publication in Neuromuscular Disorders. 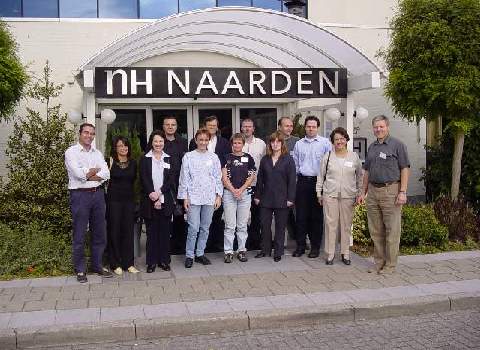