News
You are here: Home / Psychological Interventions for improving quality of life in slowly progressive...

In the Early-Career Programme: Joana Garmendia Zaldua (Spain) and Ronne Pater (the Netherlands).

Translations of this report by:

The 267th ENMC International Workshop on “Psychological Interventions for improving quality of life in slowly progressive neuromuscular disorders” was a hybrid meeting, with 23 participants on site and four connected remotely. The workshop aimed to bring together experts in psychology and cognitive behaviour in neuromuscular disorders (NMD) to share research, clinical and personal experience, with the ultimate aim to improve psychological support for people with slowly progressive NMD.

A large proportion of the first day was focused on understanding the lived experience of NMD. Four people living with different NMD (expert patients) described the key psycho-social challenges and opportunities caused by their condition. Patients expressed that they constantly have to adapt their daily activities to live with the changing symptoms caused by their progressive disease. They described having to manage resultant emotions like frustration, anxiety about the future, and sadness. These expert patients also described that NMD affects close family members, and as such, NMD has a psychological impact on the entire family system.

Prior to the workshop, organizers, expert patients, and early career researchers developed a questionnaire for NMD patients, caregivers, and professionals. This sought to collect opinions on the critical psychosocial needs in NMD, how psychological support should be configured, and the barriers to accessing psychological interventions.

More than 240 respondents completed these questionnaires, and the data were presented during the workshop. The survey outcome showed that those affected by NMD consider psychological support necessary for physical (loss of function, pain, and fatigue), social (changing relationships, stigma), and psychological (fear, shame, accepting the disease) problems. The data demonstrated that common psychosocial challenges in the early stages of the disease (right after the diagnosis) are the lack of understanding of the disease (uncertainty), difficulty accepting the disease and its impact on their lifestyle, changes to patients’ autonomy/independence, fear of the future, and feelings of guilt (e.g., about heredity). In addition, the professionals who completed the questionnaire mentioned the importance of communication between the multidisciplinary team and patients and their close relatives in all stages of NMD. The presence of a mental health professional within the multidisciplinary team is a must.

In later stages of NMD, respondents described common psychosocial challenges such as coping with stressful feelings that go with the disease progression, dealing with chronic symptoms (pain and fatigue), changing relationships, acceptance of assistive devices, and the struggle to keep up with responsibilities in everyday life, such as work. Close relatives can have trouble coping with the disease of their child, parent, or partner and its impact on daily life responsibilities, such as family and work. They can feel unarmed in dealing with the illness and need to understand the condition and accept and support themselves and their family members.

The following day of the workshop started with an examination of the evidence base for different types of psychological treatment in NMD. Many interventions targeting psychosocial functioning were discussed, such as Acceptance and Commitment Therapy (ACT), Cognitive Behavioural Therapy (CBT), and Relaxation and Mindfulness techniques.

ACT is a psychological treatment that focuses on helping people to live well with the NMD by improving a skill called ‘psychological flexibility.’ Psychological flexibility includes doing what matters, opening up to your feelings, and being present in the here and now to coordinate your life around the things you want, instead of living to keep your pain/distress or pushing your discomfort away. Data from a recent randomized controlled clinical trial of ACT with people with NMD was presented. Encouragingly, this trial showed that ACT treatment led to improved quality of life and mood.

CBT aims to change unhelpful beliefs about the self, the world, and illness. Data were presented from randomized controlled trials of CBT for fatigue in patients with Myotonic Dystrophy type 1 and facioscapulohumeral muscular dystrophy (FSHD). Encouragingly, again, in both studies, fatigue improved in the group who received CBT compared to control groups receiving treatment as usual. In the trial with FSHD, MRI was used to assess whether muscle quality had improved following CBT. Preliminary findings showed less deterioration of the muscle in the group receiving CBT.

The content of other common psychological therapy methods was considered, such as relaxation and mindfulness methods. Relaxation involves tensing and relaxing muscle groups (Jacobson method), deep breathing (diaphragmatic), or meditation, where you aim to bring your attention to the present moment without evaluation and/or judgement.

Later sessions focused on other common considerations in psychological support, such as sexuality and adapting treatments for cognitive impairment. NMD symptoms can negatively influence sexual functioning and, with that, quality of life. Practical advice was shared regarding how to open up conversations about sexual functioning and suggestions for ways to facilitate a fulfilling sex life as NMD progresses.

To conclude, there was a discussion at the conference about how brain involvement can lead to cognitive impairments and behavioural changes in conditions like Duchenne muscular dystrophy and myotonic dystrophy.  The discussion characterised the pattern of impairments in these conditions and what might influence them.  The prevalence of psychiatric diagnoses and neurodevelopmental disorders in NMDs was considered, particularly in childhood. The group discussed how pragmatically to intervene with common cognitive/behavioural/neurodevelopmental repercussions of some NMD, such as apathy and unawareness of impairment.

The opportunities for psychological support/treatments were highlighted over the course of the workshop. The evidence shows that such treatments can improve quality of life and mood, and lower fatigue symptoms. Such interventions could also be helpful for the families of those living with NMD, who also face psychosocial challenges due to the condition. Consequently, a key recommendation was that psychological interventions should be embedded in the routine clinical care offered to people living with NMD.

However, such psychological support should be carefully considered. Providers of psychological support should consider the person as an individual and involve the wider family and social system. Each person has a different way of coping and ability to adapt to the adverse events (resilience), which could explain why certain patients/caregivers can bear the disease burden more successfully (or more positively) than others can. Therefore, it is essential to see the person behind the diagnosis; they are connected to a system of family and friends and have personal wishes that also need to be addressed. Not all people with NMD will require psychological support, but where this is offered, they should have control over the process so that it is accessed at the right time.

To continue sharing up-to-date evidence and best clinical practice and promote collaboration on research programs, we plan to set up a network of patients, healthcare professionals, and researchers with expertise in psychological support in NMD.

A full report will be published in Neuromuscular Disorders 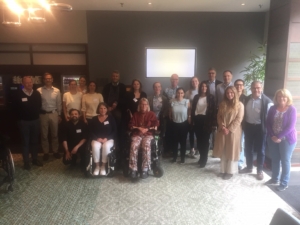