This workshop was made possible with the generous support from :

Description of the workshop:

The 216th ENMC workshop entitled “Clinical trial readiness for FKRP related muscular dystrophies” took place from the 15th to the 17th of January 2016 in Naarden, The Netherlands. A multidisciplinary group of 20 persons from 8 countries (UK, USA, Germany, France, Netherlands, Turkey, Canada and Denmark) attended the workshop, including 17 clinical and basic science researchers, a patient, a patient’s parent and representative from the Cure CMD foundation and a representative of the LGMD2i Research Fund. It is unique, since a meeting on muscle dystrophies due to mutations in the FKRP gene has never been organized before. 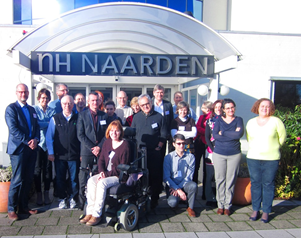 Deficiencies in the Fukutin-related protein (FKRP) are part of the dystroglycanopathies group, which are diseases caused by defects in the glycosylation processing of a protein called ‘alpha-dystroglycan’. This protein forms an important link between the muscle cell and its surroundings. When defects in the ‘alpha-dystroglycan’ are due to mutations in the FKRP gene, it creates a wide range of pathologies from the milder and more frequent Limb Girdle Muscular Dystrophy type 2I (LGMD2I) to the rarer and very severe cases of Congenital Muscle Dystrophy (CMD), Muscle Eye Brain (MEB) disease and Walker Warburg Syndrome (WWS). There are no treatments for these diseases. The emergence of new therapeutic approaches like gene therapy generated the need for an expert discussion on the readiness for future clinical trials.

The discussions were divided in 4 sessions, encompassing the following topics: clinical presentation and natural history of FKRP deficiencies; patient landscape, registries and databases; FKRP function, models and therapies; and biomarkers and outcome measures.

The wide spectrum of phenotypes was underlined, as well as the predominance of the so-called “L276I founder” mutation, leading to a mild form of LGMD2I, especially in Northern Europe. The importance of the registries as tools to resolve the fragmentation of patient data was repeated in several presentations. Importantly, registries help to facilitate recruitment for clinical trials and natural history studies. Individuals with FKRP deficiencies have usually been part of local or national registries for neuromuscular diseases. In 2011, a unique global FKRP registry (Newcastle, UK) was started to centralize clinical data of people with FKRP deficiencies on a global scale as a way to increase the strength of patient representation. Three main challenges were highlighted: specific national regulatory requirements on the sharing of patient information prevent some countries to participate; information about the FKRP registry needs to be disseminated to reach as many patients as possible; and the clinicians of registered patients need to take the time to enter relevant clinical information.

The function of FKRP is still not biochemically proven even though it is known that FKRP at least participates in the complex process of alpha-dystroglycan glycosylation. There are several teams working on studying the functions of the FKRP protein. Preliminary data were presented on techniques to produce and purify FKRP, the first necessary steps to study FKRP function.

Studies in FKRP-deficient mouse models are complicated by the fact that the deletion of the FKRP gene is lethal to mice embryos. On the contrary, mice that contain the same mutations in the FKRP gene as human patients suffer from very mild muscle damages. This type of mice has been used to show the efficacy of a gene transfer therapy to restore muscle function.

Biomarkers are molecules in our body fluids (blood, urine, or saliva) indicative of a disease state. For example, creatine kinase has elevated level in individuals with muscle diseases. There are biomarkers that vary in concentration in response to specific activities or treatments. Finding and validating effective biomarkers is critical to design clinical trials and test experimental treatments in patients. Some ongoing studies have identified a panel of several hundreds of blood biomarkers for LGMD2I. The next step is to test the effectiveness of these markers.

Several presentations focused on outcome measures (ways to measure improvement in muscle strength by a drug e.g.) and on their usefulness in measuring changes in muscle function. Finding a useful functional test for LGMD2I patients is quite challenging because of the slow progression of the disease. New devices to measure muscle strength were discussed.

To understand how a disease progresses and how the medical condition of patients changes, studies called natural history studies need to be performed. For a slow progressing disease, natural history studies are several-year long. The more patients monitored during the study, the higher the quality of the data collected. Several results of natural history studies were interesting and will be studied further. For example, it was mentioned that changes in the 10-meter walk test and the 6-minute walk test in individuals with LGMD2I over long period of time were quite small. Importantly, it was mentioned that fatigue was the most noticeable symptom for some patients. The ability to get up –from a chair for example- was more representative of the condition of people with LGMD2I than the number of minutes they were able to walk.

A full report of this ENMC workshop is published in the Journal Neuromuscular Disorders (pdf).