Collagen VI-related myopathies are a group of neuromuscular disorders due to mutations in any of the three genes encoding collagen VI (ColVI), COL6A1, COL6A2 and COL6A3. Defects in ColVI, a major extracellular matrix component in many tissues, were initially reported in BM and UCMD which were considered as two separate entities with different patterns of inheritance. In the last few years, the clinical picture has greatly expanded. The results of studies in models of the disease indicate an opportunity for therapeutic interventions, one of which has recently been evaluated in a pilot trial. Two larger clinical trials are under consideration in partnership with industrial partners.

The present meeting covered areas from genetics and the clinical phenotypes associated with ColVI defects, to the molecular processes taking place in damaged tissue and the therapeutic avenues that will be investigated in the upcoming clinical trials. Several participants reported on the complexity of the molecular diagnosis and the emergence of novel approaches to detect complex gene rearrangements. The participants have recognized the need for a revised clinical classification taking into account patients with intermediate presentation. In addition there are clearly some patients with phenotypes highly suggestive of UCMD or BM where no ColVI mutations can be found, so other genes are likely to be involved. The need to study other candidate genes was discussed, in particular the recently describedCOL6A5 and COL6A6 genes whose expression has been refined in various tissues.

Studies on the mechanisms linking ColVI mutations to muscle pathology were reported in models of the disease and in cell cultures derived from patients, and the possibility for therapeutic interventions was discussed, along with the need for relevant outcome measures to be taken into consideration for clinical trials.

Currently existing patient registries and plans for an international collaborative effort with the patient organization Cure-CMD and the TREAT-NMD network were presented. 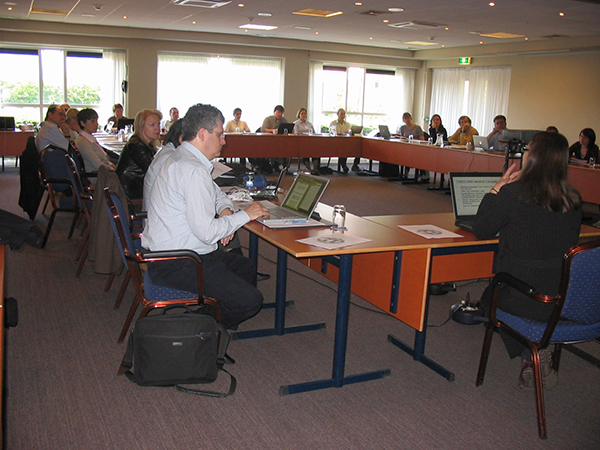