The 167th ENMC workshop organized June 19-21,2009 in Naarden, The Netherlands was the second (= follow-up) workshop on X-linked myopathy with excessive autophagy (XMEA) and related vacuolar myopathies, the first one having been the 77th ENMC workshop March 10-12, 2000. The initiative to organize this follow-up workshop was the fact that the gene defects which cause XMEA and the main features how the myofibers are damaged (Ramachandran, Munteanu et al, Cell 2009; 137:235-246) have just recently been clarified. The workshop comprised of 16 clinicians/clinical researchers and basic scientists from 4 ENMC member states and 4 non-member states.

Vacuolar myopathies comprise a group of several different muscle diseases, both hereditary and acquired. They have in common the presence of vacuoles within the sarcoplasm of the diseased myofibers. It has become evident that the structure of the vacuoles is not the same in different vacuolar myopathies and their structure reflects the reason why vacuoles are formed. XMEA belongs to such a group of vacuolar myopathies in which the vacuoles have been defined as autophagic vacuoles with sarcolemmal features (AVSF). This means that the vacuoles are lined by a membrane that is similar as the sarcolemma, i.e. the membrane that lines the whole muscle fiber. Autophagy may be called the recycling system of the cells: In short, molecules and cellular organelles, which have faulty structure or are worn out, are isolated into membrane bound vacuoles, so-called autophagic vacuoles. Within another membrane bound vacuole called lysosome the cell transports into autophagic vacuoles enzymes, which are able to break down (degrade) the “trash” (= cell debris) within the autophagic vacuoles. Many of the breakdown products are then re-used by the cell. An important feature is the fact that the degradative enzymes require acid surroundings (low pH) to function and therefore hydrogen ions must be pumped into the autophagic vacuoles to lower the pH to a correct level.

So far the genetic defect has been discovered in two AVSFs: XMEA is one of them and Danon´s disease with mutation in LAMP-2 (a protein in the membrane of lysosomes) is the other. The gene defect in XMEA is unique among myopathies. The defect is in VMA21 gene, the protein product of which is needed in the construction of a protein complex V-ATPase, which is responsible for pumping hydrogen ions into lysosomes, i.e. making the pH within lysosomes acidic. In XMEA the defect inVMA21 results in too little amount of V-ATPase, consequently too few hydrogen ions are pumped into the autophagic vacuoles (= too high pH) and therefore the cell debris within the autophagic vacuoles cannot be degraded but instead it accumulates within the myofibers.

At present 13 unrelated families have been diagnosed to have XMEA with VMA21 mutation. In this workshop the clinical pictures of XMEA patients in different countries were compared. It was in principle similar, though the age of onset and rate of progression varied to some extent. Most often it begins in childhood and is relatively slowly progressive, though even congenital cases have been diagnosed in Japan. The EMG finding of myotonic discharges without clinical myotonia could be detected even in clinically asymptomatic patients. The MRI findings appear to be quite suggestive of XMEA. The muscle biopsy findings are very uniform and multilayered basal lamina as well as extrusion of the debris out of the myofibers (exocytosis) appear to be unique features of XMEA, which differentiates it from other AVSFs, some with identified gene defects like Danon disease, some with known linkage to chromosome 19 and some with no genetic data available so far.

An obvious therapeutic possibility in XMEA would be the normalization (lowering) of the pH within the autophagic vacuoles. This possibility was discussed at the workshop, but since the gene defect and the pathogenesis of XMA have been published only this April, therapeutic experiments are just being planned.

This workshop was organized by Prof. H. Kalimo and held in Naarden in June 2009.
The report for this workshop is not (yet) available. For further information, please contact one of the workshop organizers or the ENMC office. 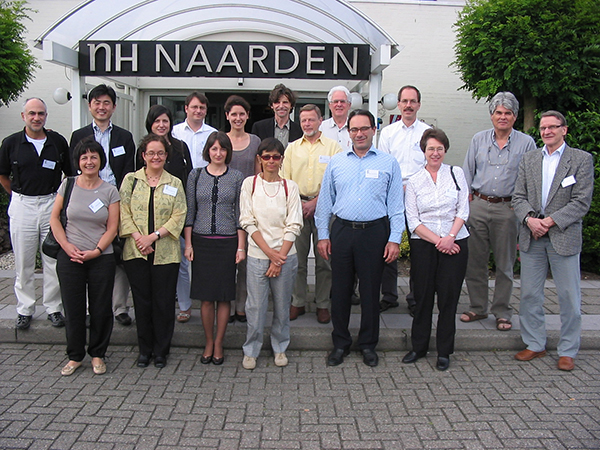