News
You are here: Home1 / Desmin and Protein Aggregate Myopathies

Nineteen clinicians and scientists from seven European countries and the USA recently assembled for the 156th ENMC-sponsored International Workshop on “Desmin and Protein Aggregate Myopathies (PAM)” in Naarden, The Netherlands. The aim of the workshop was to discuss recent advances in this group of neuromuscular conditions, to correlate genetic, clinical, biopsy and imaging findings and to consider ways forward to therapy.

There has been a lot of recent interest in the way that some diseases can be caused by the abnormal accumulation (aggregation) of proteins in cells. This is especially important in cells that do not divide like nerves and muscle. It is now known that several disorders can result from this kind of protein accumulation- examples in the central nervous system include Parkinson’s disease and ALS. Accumulation of proteins in muscle cause the so called “protein aggregate myopathies” and this was the subject of this workshop.

Over the years that it has been possible to study muscle under the microscope, so-called inclusions have often been noticed within muscle fibres. These have been seen mainly in the conditions known as the congenital myopathies. As special staining techniques became applied, many of these inclusions were shown to contain a protein desmin. This observation prompted the foundation of a ‘Consortium on Desmin and Desmin-related Myopathies” within ENMC and to date there have been four ENMC-sponsored workshops on muscle conditions involving desmin.

Exciting advances in the field led to the decision to hold this 5th workshop. At this meeting the discussion encompassed a broader group of conditions which are now recognized to fall into the group of protein aggregate myopathies. Amongst these variable late onset autosomal dominant conditions now also known as the myofibrillar myopathies, several causative genes have been identified including mutations in the desmin gene itself as well as myotilin, filamin c, alphaB-crystallin, VCP and ZASP.

The participants discussed diseases due to mutations in all of these various genes including their clinical spectrum, diagnostic tools and the patterns of protein aggregation in muscle by light and electron microscopy. Different ways that protein accumulation might cause disease were also considered, including discussing the ways that cells usually cope with degrading and processing abnormal proteins. Finally a round table discussion was devoted to therapeutic approaches to these disorders. During this session the principles of good medical management of complications with the heart and breathing muscles were discussed as well as novel ways to approach treating the underlying diseases.

The participants were able to identify characteristic clinical signs, imaging findings, and biopsy findings (by light and electron microscopy) in PAM which could help to direct the diagnostic process. For the future, it will be important to find new genes among the many patients with PAM in whom there has already been the exclusion of mutations in known genes. Registries of patients could be a useful resource to study natural history and ultimately identify patients for trials. Other important work will be to create new cell lines and mouse models to study evolution and progression of the various forms of PAM and provide a basis for therapeutic intervention.

A detailed report of these conclusions, including the guidelines, is published in Neuromuscular Disorders (pdf) 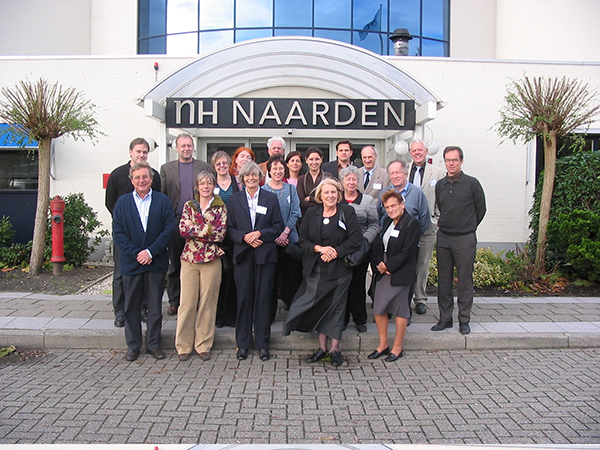