The 2nd ENMC workshop on distal myopathies was held in Naarden, The Netherlands, from 8th to 10th March 2002. It was attended by 26 active participants from Australia, Austria, Belgium, Finland, France, Germany, Israel, Italy, Japan, The Netherlands, Spain, Sweden, The United Kingdom and the U.S.A. The meeting reviewed the extensive scientific progress since its 1st workshop in 1994: All of the four previously clinically defined entities have reached the point of genetic definition by linkage assignment and some have been defined by their gene and causative mutations. In addition a large number of new disorders have been reported in single families in which linkage has been established or linkage to loci for the known distal myopathies has been excluded. Participants reported on three new genes involved in muscle diseases with marked distal wasting and weakness discovered during the last year. Titin was shown to be the causative gene for Tibial muscular dystrophy. Mutations in the GNE gene were reported in the so called quadriceps sparing myopathy and in the recessive distal myopathy with rimmed vacuoles (Nonaka type). Two mutations in a myosin gene were associated with childhood onset distal myopathy (Laing type). In seven other distal myopathies the localisation of the genetic cause to a certain chromosome has been achieved, awaiting further progress to find the gene. Clinical findings in a number of families with undetermined status regarding linkage were reported in detail. Many presentations extended the current concepts of distal myopathies including occasional atypical findings in patients with GNE, dysferlin and caveolin3 mutations and in patients with tibial muscular dystrophy. The known molecular causes of distal myopathies do not yet allow specific treatment. In order to expand the knowledge of basic mechanisms leading to progressive muscle cell loss in these diseases, more research is needed to identify disturbed protein interactions caused by the mutations. The participants established a large number of agreements on collecting further families and collaborating with the research groups doing molecular genetic studies on distal myopathies.

An extended report of this meeting is published in Neuromuscular Disorders, Volume 12, No.9, November 2002. 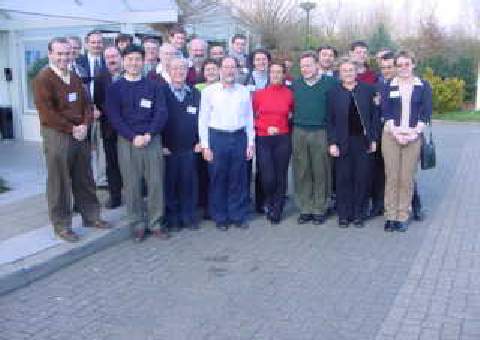 Designing rational therapy of SMA based on understanding of its pathophysio... Limb-girdle muscular dystrophy – exploring the pathophysiology of the...
Scroll to top