News
You are here: Home / Inducing muscle hypertrophy as a therapeutic strategy for muscular dys...

Eighteen participants from 5 countries (France, Germany, Italy, UK and USA) participated in an ENMC workshop on the topic of "Inducing muscle hypertrophy as a therapeutic strategy for muscular dystrophies".

Muscle atrophy is observed both in muscular dystrophies and aging. Numerous approaches have been demonstrated to induce muscle hypertrophy that could be used as a mean to reverse muscle atrophy. This workshop brought together scientists and clinicians  working on cellular and molecular aspects of this process that could be exploited as a treatment for these muscle wasting conditions.

Four aspects were discussed in detail. The first topic concentrated on cellular aspects of muscle hypertrophy and in particular on the role of satellite cells. Satellite cells are a reservoir of precursors that lay in a dormant state in muscle and are recruited during phases of muscle growth and to repair damaged tissue. An important new concept to emerge from this meeting was that not all satellite cells are able to participate to the muscle regeneration. This raises the possibility of isolating those cells which are particularly able to participate to the regeneration process. In addition, evidence was presented that the efficiency of satellite cells recruitment can differ in different neuromuscular conditions. A new therapeutic avenue was presented raising the possibility of using cells other than satellite cells as a mean of addressing muscle atrophy. In particular cells from the circulatory system were shown to be able to cross the capillary bed into muscle and participate in muscle growth and repair of an animal model of muscular dystrophy.

The second topic concentrated on the mechanism by which muscles enlarge and how they undergo atrophy. Work was presented that showed that the two processes are linked by a molecule, called Akt that not only regulates protein synthesis, but also inhibits molecules involved in protein breakdown (atrofin-1 and FOXO). The role that this pathway plays in a number of conditions characterized by muscle atrophy will now have to be explored.

The third topic concentrated on secreted factors that regulate muscle growth. Particular attention was paid to a molecule called IGF-1 and similar proteins that were shown to induce muscle hypertrophy. A variant of one of these was shown to play a significant role in muscle growth following exercise.

The last session concentrated on the novel discovery of a factor that prevents muscle development, myostatin. Gene targeting that removes this protein showed massive increase in muscle formation. Strategies were discussed aimed at developing molecules that would antagonize the function of this protein as a therapeutic means to address muscle wasting. Similarities were drawn between the development of muscle during embryonic and adult life and the role of myostatin.
A discussion consolidated the four topics in this workshop and brought together the molecules and mechanisms by which muscle atrophy develops and how can be alleviate. Collaborative strategies were set up to evaluate these hypothesis.

An extended report of this meeting has been published in Neuromuscular Disorders. To access the full report, please click here. 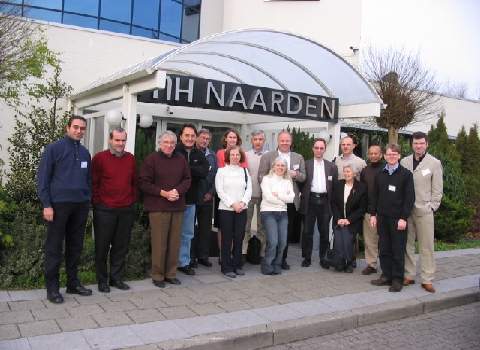