Over the past decade, altoghether four ENMC-sponsored multinational, multidisciplinary workshops were devoted to desmin ("Desmin in myology" in 1995; "Familial desmin-related myopathies and cardiomyopathies - from myopathology to molecular and clinical genetics" in 1996; "Desmin - protein surplus myopathies" in 2001), desmin-related myopathies and other protein aggregate myopathies. The last one convened 16 researchers from 6 European countries (France, Germany, Poland, Spain, Sweden and the U.K.) and the U.S.A.

The term "protein aggregate myopathies" indicates that proteins aggregate within muscle fibres as an important nosological feature. Desmin and other proteins accrue in desminopathies owing to mutations in the desmin, alpha B crystalline and unknown genes. A recently identified subgroup is caused by mutations in the selenoprotein 1 (SEPN1) gene.

The ENMC participants discussed the mutational spectrum of desmin, mutant desmin in in-vitro and in transgenic mice as well as the role of desmin-associated proteins. The spectrum of mutations in the desmin gene has been broadened considerably since the last workshop, two years ago. Now more than 19 missense and 5 other mutations have been identified, but 60% of patients with the phenotype of desmin-related myopathies do not show mutations in desmin or alpha B crystallin. The significance of cardiac involvement has also become more apparent as reported at this workshop. A new class of myopathies, Myosin myopathies, now encompasses myosin storage myopathies (formerly hyaline body myopathy) due to mutations in the myosin heavy chain I and IIa (formerly IBM3). While the pathogenesis of aggregation of mutant and non-mutant proteins is still incompletely clarified, the proteasome pathway appears to be involved.

Further understanding of pathogenetic principles in this protein aggregation will enable meaningful approaches to therapy. Future research will concentrate on those familial desmin-related myopathies (DRM) genetically not yet identified, on the connotation of sporadic DRM, and on investigations of the pathogenetic principles of protein aggregation.

It may safely be stated that this series of four ENMC-sponsored workshops on desmin and related myopathies has considerably enlarged awareness, recognition and research on desmin diseases and other protein aggregate myopathies marked by abnormal accumulation of proteins within muscle fibres. They have attested and will continue to attest to the importance and success of multidisciplinary and multinational collaborative research, being one of the reasons for ENMC workshops and one of the main aims of ENMC.

An extended report of this meeting has been published in Neuromuscular Disorders. To access the full report, please click here. 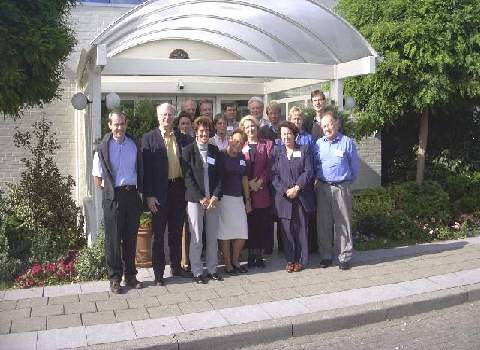