Translations of this report by:

The 244th ENMC workshop was held from May 10-12, 2019 and brought together a representative of patients and neuromuscular experts from Europe and the United States to discuss newborn screening (NBS) for spinal muscular atrophy (SMA). The aim of this workshop was to synthetize the currently available information on NBS technical, ethical, economical and practical aspects, and to identify the gap in our current knowledge of patients identification and communication of diagnosis and treatment following NBS.

Spinal Muscular Atrophy (SMA) is a genetic disorder with autosomal recessive transmission, characterized by alpha motor neuron degeneration within the spinal cord. This is the main genetic cause of infant mortality and has long been considered an incurable disease. SMA is classified into three main types according to onset and achieved milestones in type I (most severe form, never sit) type II (never walk) and type III (walkers but lose ambulation later in life). SMN1 is the responsible gene in all SMA types and more than 90% of SMA cases show absence of both copies of the gene. A highly homologous paralog gene, SMN2, is considered a phenotypic modifier and the number of copies (from 1 to 5) correlates well (but not absolutely) with the phenotypes1.
Recently, two papers describing two successful strategies of treatment have been published back to back in the New England Journal of Medicine2,3. This happens in the context of several promising other trials which suggest that the face of the disease is definitely changing.

The only treatment currently approved for SMA is Nusinersen (Spiranza®) from Biogen, which was approved by EMA on June 01st 2017. Other drugs in clinical development are present: Zolengsma from Avexis-Novartis (approved by FDA, in revue in Europe) and Risdiplam from Roche.
All data so far converge to show that the earlier is the treatment, the more efficient. In this view, pre-symptomatic treatment is much more efficient than post symptomatic treatment as assessed by the data from the Nurture clinical trial in pre-symptomatic babies and first experiences from the field.
Moreover, consensus criteria4 to include SMA in NBS programs are virtually met8 and several NBS programs are ongoing5-7.

During the workshop, the various SMA NBS programs in progress or in preparation were presented, as well as their different modalities (method, support, parental consent, screening circuit).
Representatives of pharmaceutical companies presented their data on current treatments and trials in pre-symptomatic patients. The medico-economic aspect of NBS and pre-symptomatic treatment was discussed, as well as an ethical vision of NBS with the presentation of studies on NBS vision in the general population.
Parents' associations presented access to treatment and trials in their respective countries, progress on NBS, and their expectations of NBS. They also expressed their expectations about the medical communication that is done around the disease, whether it is pre- or post-symptomatic. They put forward the idea of issuing recommendations and guidelines for countries that would like to develop NBS at home.

The issue of treatment and more specifically the time required to treat according to the number of copies is important and requires more evidence. Working groups have been set up to provide the necessary data for these decisions. This includes work on the quantification of the number of copies, the literature on patients with 4 copies of SMN2, but also on recommendations on good practices for NBS and the creation of a European patient registry identified by NBS.

A full report is published in Neuromuscular Disorders (PDF) 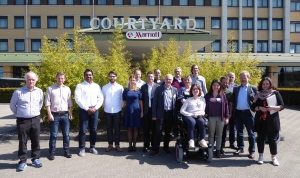