News
You are here: Home / Planning for an international trial of steroid dosage regimes in DMD

The 145th ENMC Workshop was held in Naarden, the Netherlands, from 22nd-24th October 2006, with support from MDA for the travel expenses of the US participants. The aim of the workshop was to finalise the development of a full protocol for an international trial of steroid dosage regimes in DMD for submission to the NIH. Attendees included the trial writing group from Newcastle (UK) and Rochester (USA) led by the co-principal investigators on the project, Professor Kate Bushby and Dr Robert Griggs, as well as representatives of the trial investigators from Belgium, France, Italy, Scandinavia and the US. At the first meeting of the ENMC corticosteroid trial group in April 2004 the need for a trial in this area was highlighted by doctors and international patient group representatives who were dissatisfied with the confusion of corticosteroid regimes in common use. Since then, NIH funding for a planning grant to develop a trial protocol has been achieved and a group of investigators representing around up to 55 sites in 14 countries has been assembled.

The protocol for the trial was discussed. The trial will test three corticosteroid dosage regimes in a randomised double blind manner (prednisone 0.75mg/kg/day, deflazacort 0.9mg/kg/day and prednisone 0.75mg/kg/day 10 days on and 10 days off). 300 children between the ages of 4 and 7 years will need to be enrolled for at least 36 months within a core five year study to see how the regimes differ with respect to how effective they are and how their tolerability differs. The primary outcome measure has been chosen to combine three key elements of effectiveness - time to rise from the floor (as a proxy for overall muscle function), forced vital capacity (as an indicator of respiratory muscle strength) and satisfaction with medication. Secondary outcomes will include the achievement of new skills such as jumping and running and the profile of side effects with the different regimes. Quality of life will also be addressed. As corticosteroid use in DMD is a lifelong issue, a five year follow on study to look (unblinded) at the long term effects of use of these different regimes will also be developed. A further innovative feature of this trial is the close attention which has been paid to the standardisation of the management of possible steroid related side effects, and the management of DMD in general. Working groups have concentrated on these areas, producing guidelines for weight control, physiotherapy, behaviour management, cardiac follow up and bone health which will be widely disseminated. The trial group brought together to work on this protocol will form the basis for an important network for the development of this and future trials in DMD. The next task for the group is the submission of two parallel grants to NIH in early 2007. These will address the clinical/trial conduct and statistical/ data handling issues for the full trial in two separate documents. The clinical trial will be run from the Clinical Trials Unit in Newcastle with co-principal investigators Professor Bushby and Dr Griggs. The statistics and data handling will be led from the University of Rochester, PI Dr Mc Dermott.

A full report of this meeting is published in Neuro Muscular Diseases. (pdf) 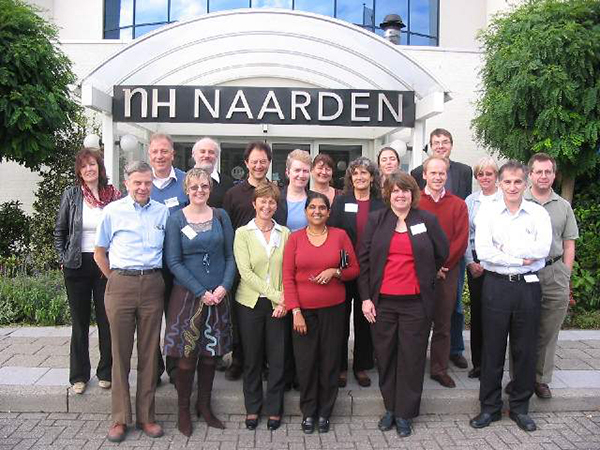