We are grateful to the LGMD2i Fund for contributing to travel expenses for speakers from non-ENMC member countries.

The 220th ENMC Workshop entitled ‘Dystroglycan and the dystroglycanopathies’ and the second such workshop on the same subject, took place from the 27th – 29th May 2016 in Naarden, The Netherlands. The 18 participants were a multidisciplinary group comprising clinical and basic scientists from seven different countries (France, Germany, Mexico, Sweden, The Netherlands, UK and USA) including a patient and carer and a representative from a patient organisation. 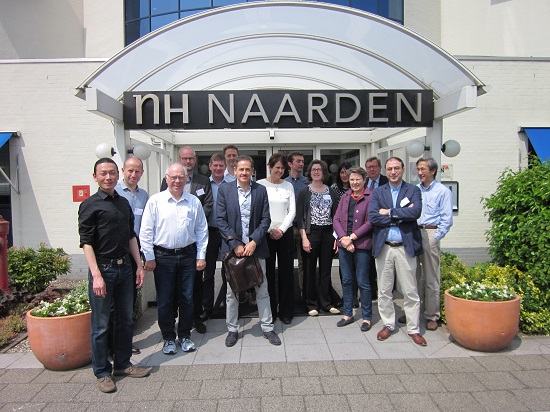 Dystroglycan is a core and essential component of the protective layer that surrounds each individual muscle fibre and the developing brain. It is also present in many other tissues where it performs a wide variety of functions. Dystroglycan along with other proteins maintains vital links between the inside of the cell and the outside which serves to protect the delicate cell membrane. Perturbations in the ability of dystroglycan to interact with components, particularly on the outside of the cell, have severe implications for human disease. These diseases are collectively termed the dystroglycanopathies.

The aims of this workshop were to bring together researchers working on the clinical and basic science aspects of these important modifications of dystroglycan, whether in relation to the pathophysiology of patients, animal models of dystroglycanopathies, or cellular systems addressing the effects of these modifications on dystroglycan function. By combining clinical and basic scientists, and a range of diseases / models / cellular systems, we hoped to provide a platform for the sharing of ideas, reagents, and animal models. We also aimed to generate novel hypotheses thus opening up new avenues of research into these diseases for which there are as yet no forms of therapy.

The workshop reviewed a broad range of topics relevant to the dystroglycanopathies, from patient registries and clinical diagnostic approaches to the functional role of dystroglycan in muscle and brain, as well as potential new therapeutic approaches to treat the dystroglycanopathies. There were presentations from a person affected by a particular type of dystroglycanopathy called LGMD2I, supported by insights from his carer. The mother of a boy with LGMD2I, and representative of the organisation Cure CMD, also gave her perspective. These presentations provided a valuable insight into the importance of finding a therapy for this group of diseases particularly to basic scientists who have no direct contact with patients.

We heard how modern DNA sequencing technology has changed the diagnosis of the dystroglycanopathies and how all this information is being collected in registries in order to facilitate the implementation of clinical trials if and when viable therapeutic approaches become available. With a doubling since the previous workshop in the number of identified genes directly responsible for the full function of dystroglycan, much discussion centred around how these genes contribute to the way that dystroglycan performs its role in muscle and brain, as well as in many other tissues and cells where dystroglycan is also present. Presentations also covered potential treatments for the dystroglycanopathies which have so far been tested in mice with similar disease symptoms. This ranged from simple small molecule inhibitor drugs to alleviate symptoms, to more complicated gene replacement therapies using viruses to get new genes into muscle.

The following key conclusions were reached:

1. An agreement from those present to form a consortium to address future major scientific funding programmes that may be announced by National or International agencies, such as the EU Horizon 2020 project

2. A consensus for the naming of dystroglycanopathies which should be classified as:

This recommendation will be taken forward to a forthcoming ENMC Workshop that will specifically address naming and nomenclature of LGMD which also encompasses several dystroglycanopathies.

3. To share important research reagents and tools such as antibodies, cells, tissues and mice through existing biobanks, and to encourage the sharing of therapeutic viruses.

4. Agreement to apply for funding to hold another meeting in 4 years time.

A full report is published in  Neuromuscular Disorders (pdf).