News
You are here: Home / Titinopathies – International database of TTN mutations and phen...

The goal and purpose of this ENMC workshop was to establish an international database of TTN (Titin gene) mutations, variations and their clinical presentations, to be able to determine if particular genetic variants of the gene are the cause of disease. Titin is a giant protein, that functions as a molecular spring responsible for the structural integrity and passive elasticity of the muscle. TTN mutations have to date been reported to be the cause of various diseases collectively termed titinopathies, including a range of skeletal muscle and cardiac diseases.

We brought together worldwide leaders in the Titin myopathy field, Titin family advocates, as well as representatives from other successfully developed groups. Some attendees are already collaborating together to identify disease causing genes and their clinical descriptions. 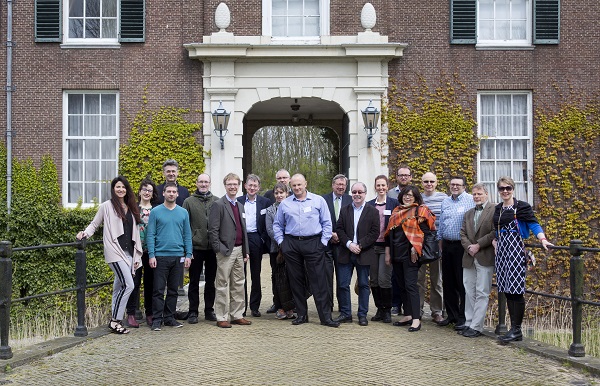 The meeting then went on to discuss clinical presentations as well as genetic variations of cases from multiple clinicians and researchers. In the sharing spirit of the conference, people presented various cases that have not yet been published in the medical literature. There is a wide range of clinical symptoms that include things like muscle weakness, rigid spine, upper and lower body contractures (tight joints), breathing problems, heart disease and more. The age when symptoms start ranges from birth to adulthood. It became clear that the range of Titin symptoms is multifaceted and varied.  Dr. Ana Ferreiro suggested using the term “congenital titinopathies” to describe the whole spectrum of infantile-onset muscle diseases, with or without heart involvement, associated with TTN mutations.  Dr. Carsten Bonnemann commented that when diagnosing titinopathies clinicians need to consider genetic information (“genotype”), physical features (“phenotype”), microscopic lesions of the muscle cells (“histiotype”) and functional defects (“physiotype”).

The meeting covered different methods of making a genetic diagnosis. The tools for analysis of whether these variants are disease causing or not were reviewed. The group then assessed several databases in existence to see if they would meet the needs. Due to its large size and intricate nature, determining whether a TTN gene variant causes disease or not is a tough challenge. In addition, the current computer tools available are not adequate to meet this need. Thus, a Titin-specific database is necessary.

Specific database requirements were then discussed.  The database needs to include the ability to make an accurate genetic diagnosis as well as to capture a good clinical picture of symptoms.

Key deliverables and who is taking the lead: