News
You are here: Home1 / The involvement of skeletal muscle stem cells in the pathology of muscular...

Title: The involvement of skeletal muscle stem cells in the pathology of muscular dystrophies

Background and aims of the workshop

What were the outcomes and how will they benefit patients

Identification of forms of muscular dystrophies which, as a consequences of discussions held in the workshop, may have their origin in satellite cells.

We arrived at some conclusions as to why muscles in different types of muscular dystrophy have different pathological features.

Standard operating procedures for analysing zebrafish models of muscular dystrophies should be set up.

Plan to develop the fruitfly as a model system in which to investigate the contribution of the satellite cells and the muscle fibre in the pathological process of muscular dystrophies.

What are the future activity plans?

Timelines for future plans and who is taking the lead

1)    Developing a community to investigate the role of satellite cells in the development of pathology of a spectrum of muscular dystrophies. Leads: Gillian Bulter-Brown, Ana Ferreiro, Francesco Muntoni, Jenny Morgan. Timelines: 2 years

2)    Develop a research programme to evaluate systematically the role of satellite cells and muscle fibres for a spectrum of disease in zebrafish. Leads: Alasdair Wood. Timelines: 2 years

3)    Develop a research programme to evaluate systematically the role of satellite cells and muscle fibres for a spectrum of disease in fruitflies. Leads: Dhananjay Chaturvedi. Timelines: 2 years 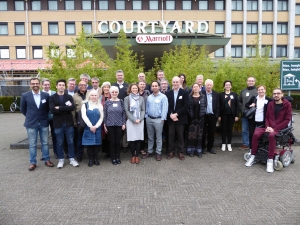 We acknowledge MD-UK for their co-sponsorship of this workshop.