News
You are here: Home / Towards a European Unifying lab for Kennedy’s disease

Title: Towards a European Unifying lab for Kennedy's disease

Twenty-four scientists working in academia, hospitals and industry from 8 different countries (Denmark, France, Germany, Israel, Italy, Spain, United Kingdom, USA) along with three patients’ representatives, (one who was also a representative of the USA patient group, The Kennedy’s Disease Association), met in the Netherlands on the weekend of the 15th- 17th of February 2019. They discussed the recent developments in research and shared the most recent clinical observations in spinal and bulbar muscular atrophy (SBMA). The workshop was conducted under the leadership of Maria Pennuto, Gianni Sorarù, Linda Greensmith and Pierre-Francois Pradat.

Background and Aims of the Workshop

SBMA, also known as Kennedy’s disease, is a rare, adult onset, neuromuscular disease caused by a mutation in the gene encoding for the protein which binds the male hormone androgen. This protein is called the Androgen Receptor (AR). The mutation is carried on the X chromosome and because the effects of the mutation are dependent on the presence of the male hormone androgen, the disease only affects males. However, females can be carriers of the mutation and if they do show symptoms, these tend to be mild.

The Androgen Receptor has an essential role in mediating the effects of the male hormone, androgen, and, when mutated, leads to muscle fatigue, weakness and atrophy of the arm and leg muscles, along with problems in speech, chewing and swallowing. Twitching or cramping of muscles can also occur.

Significant improvements have been made over the last few years in both our understanding of pathological mechanisms underlying the disease as well as in a greater recognition of the varied clinical manifestations of SBMA and in the development of clinical evaluation tools which together are essential to undertake effective therapeutic trials.

The aim of this workshop was to bring together leading clinical and basic scientists working in the field of SBMA to discuss the current understanding of basic disease mechanisms and to share and update the most recent developments in clinical evaluation of patients, with the objective of increasing the prospects of developing and testing new treatments that could effectively slow down disease progression in SBMA patients.

Although traditionally considered to be a motor neuron disease, recent studies from animal models strongly suggest that in addition to motor neurons, other tissues are also affected in SBMA. Indeed, SBMA is now considered a neuromuscular disorder and not a pure motor neuron disease, since skeletal muscle may be a primary and early site of pathology. Scientists presented findings that indicate that skeletal muscle represents a good target for therapeutic intervention as not only is it affected very early in the disease, as it may be more accessible to treatment than motor neurons which reside within the central nervous system. SBMA is thus a multisystem disorder and a greater understanding of the non-neuronal tissues affected in SBMA is a priority area for research. Future studies will be therefore focus on unravelling the mechanisms of mutant AR toxicity in peripheral tissues and increasing our understanding of tissue-specific functions of the AR.

The optimal therapeutic approach to treat SBMA remains uncertain. With recent developments in gene therapy, one particular approach that has been proposed is to reduce the expression of the AR; however it is not clear whether this is the best strategy for treating the disease. Although this approach may reduce the toxic effects of the mutant AR (gain-of function effects), at the same time it will also reduce the protective and positive effects exerted by the AR (loss-of function effects), for example in the muscle. The modulation of AR activity by targeting the synthesis, structure, post-translational modification and degradation of the mutant AR emerged may be a promising approach for the disease.

Creation of a biobank

To increase the impact of research on SBMA, the scientists participating in the Workshop proposed that a European Biobank of tissues from animal models, as well as a SBMA patient biobank would be valuable resources for the SBMA research and clinical communities.  Moreover, the participants of this Workshop agreed that resources generated within individual laboratories investigating SBMA (e.g. plasmids, cell lines) should be made available to the research centers that form part of the SBMA network. The scientists believe that making resources promptly accessible to this group could guarantee a more rapid and efficient progress of research on SBMA. However, to establish the animal and patient tissue biobanks it is clear that appropriate funding will need to be sought from European funding agencies.

From a clinical point of view, the participants taking part in the workshop recognized the urgent need for more accurate and reliable biomarkers of disease progression in order to enable patient stratification and for the evaluation of disease progression – both of which are essential for effective clinical trials. Over the past few years, clinical tools to measure disease severity and progression rate have been applied to the study of SBMA patients. Some of the most widely used measures of disease severity include an SBMA-specific functional scale (SBMAFRS), the 6-minute walk test, the AMAT scale and quantitative evaluation of muscle force. However, these clinical tools have variable sensitivity and reliability in detecting changes over a short time-period in a disease with a relatively slow progression. During the workshop it was proposed that the 6MWT and possibly grip strength could be the most effective and easily performable tools which could constitute reliable outcome measures in upcoming therapeutic trials.

More sensitive tools such as muscle MRI have been recently developed and results show that MRI is a highly effective and sensitive measure both in the description of the pattern of muscle involvement in SBMA as well as in the detection of longitudinal changes in disease severity. These findings suggest that MRI may be a useful outcome measure alone or in combination with clinical parameters for use in clinical trials.

Creation of an International SBMA Registry

The experience of the Italian SBMA National Registry was presented at the Workshop. All participants agreed on the importance and value of developing an international SBMA registry, gathering clinical data and tissue samples. As such a registry would be an invaluable resource to the SBMA research community, as it would help to improve our  knowledge about the epidemiology and natural history of SBMA, it would help in the identification of new biomarkers, and assist the early recruitment of SBMA patients into clinical trials. The possibility of sharing the same platform and generally the same model and dataset of the Italian Registry was discussed and shared by all the participants.

Interactions between patient associations and researchers

The importance of collaboration between patient associations, clinicians and basic scientists for SBMA was emphasized, including the role of patient associations in the dissemination of information for example about national registries and as a means to update the SBMA patient community in the international scientific efforts in SBMA  research. A representative of the American patients’ association (Kennedy’s Disease Association – KDA) was present during the meeting, supporting relationships and exchanges between patients and researchers from all over the world. Patients representatives emphasized the importance of interaction between patients and the science community, which is sustained by communication though the internet and social media.

In order to increase scientific and clinical collaborations between groups working in different countries, it was agreed that the First International Conference on SBMA will be organized, to be held in the spring 2020. The researchers and clinicians have underlined the need to collaborate with patients’ associations in the organization of the meeting with the aim of reinforcing the communication of scientific and clinical progress to SBMA patients and families, and providing the community with the possibility to directly collaborate in the research process. 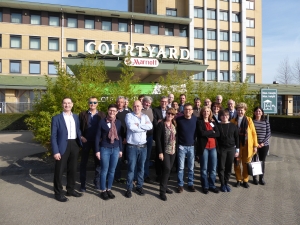 The involvement of skeletal muscle stem cells in the pathology of muscular ... Diagnosis and Management of Juvenile Myasthenia Gravis
Scroll to top