News
You are here: Home / Treatment of mitochondrial disease
Download

Eighteen participants from Denmark, Finland, France, Germany, Italy, Norway, Spain, Sweden, The Netherlands, the U.K. and the U.S.A. met in Naarden to discuss the treatment of mitochondrial disorders in children and adults. The group included adult and paediatric neurologists, metabolic paediatricians, an ophthalmologist, an endocrinologist, and other clinical scientists. The workshop concentrated on disorders that result from mitochondrial respiratory chain (MRC) dysfunction.
Since we know that MRC dysfunction may produce a great variety of different diseases, one of the first topics discussed was the nature and size of the problem. Figures from Sweden have shown an incidence in children under 6 years of 1/11,000. The same study showed prevalence figures of 1/21,000 in the paediatric population (<16). Studies from the UK looking at adults gave a potential prevalence of 1/8,000 and combining the figures for children and adults suggests that MRC disease is far from rare, and may occur as frequently as 1/8,500.
The next topic discussed was methods of assessing disease severity. This is an extremely difficult but essential area if we are to find methods with which to assess treatment response. It was clear from the discussions that we lack clear data concerning the natural history of MRC disease. Participants discussed their use of clinical investigations, such as the measurement of lactate in blood, imaging modalities and MRS, as well as biochemical and genetic methods of analysis. Whilst indirect measures of disease, such as lactate are used often, these were not felt to be good enough to measure disease severity. Biochemical measurement of MRC activity, including histochemistry, established the diagnosis, but could not be used to follow the disease. The same applied to genetic analysis, such as measurement of mutation load. For certain manifestations such as hearing impairment and ophthalmoplegia, it appears possible to use existing technologies to follow progression or indeed treatment response. In addition, the use of non-invasive techniques based on exercise testing offers an exciting possibility of follow disease progression or treatment in those patients having muscle manifestations.
The third major area of discussion concerned the current best practice for the treatment of mitochondrial disease. It appears that much of our management of patients with MRC disease is based on anecdotes or case-reports of single or small numbers of patients. Whilst many of the participants used a variety of supplements, including ubiquinone, nicotinamide, riboflavin, vitamin E and carnitine, with varying degrees of success, it was generally accepted that there was insufficient data to know whether response was real or simply natural fluctuation in disease severity. Dichloroacetate treatment is being evaluated in larger clinical trials, but individual experience suggested that this had little impact on disease and should be confined to acute use where lowering of lactate concentration and thus improvement of acidosis is the goal. The treatment of specific manifestations such as seizures, cardiac dysfunction, hearing loss and general nutrition was felt to be extremely valuable in appropriate individuals and something that should be stressed since these interventions improve quality of life significantly. A number of novel treatments including genetic manipulations were also discussed and experience with these techniques is growing. Apart from gene-shifting experiments, where satellite cell proliferation is induced in the hope that this will replace diseased with normal muscle, none are yet at the point where they can be used on patients.
From our discussions we were able to produce two documents, a consensus statement on the current best practice for the treatment of mitochondrial disorders and a draft clinical rating scale for mitochondrial disorders. The rating scale will hopefully form the basis of future joint clinical studies. The participants stressed the importance of the European collaboration and it was agreed that the group should form an ENMC consortium with the aim to meet again in 12 to 18 months to consolidate the links and compare prospectively collected natural history data and treatment experiences.

An extended report of this meeting is published in Neuromuscular Disorders, Volume 13, No. 9, November 2003. 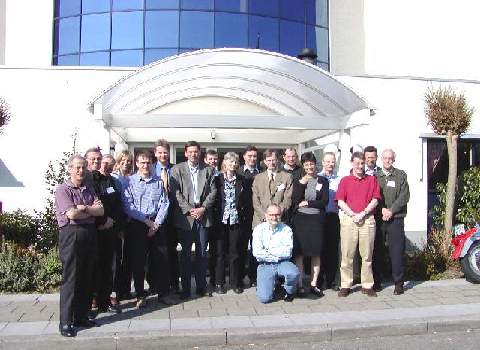