The first ENMC workshop on Pompe disease, also referred to as glycogen storage disease type II, was held in Hoofddorp from the 22nd to the 24th of April 2005. Twenty participants from The Netherlands, France, Germany, Italy, Austria, Denmark, the United Kingdom and the Untied States attended this meeting. Workshop participants covered areas of basic research, diagnostics, clinical care and therapies in Pompe disease. Another area that was discussed was nomenclature

Pompe disease is an autosomal recessive condition caused by mutations in the gene for acid a-glucosidase, an enzyme responsible for the breakdown of lysosomal glycogen. The reduction or complete loss of a-glucosidase activity leads to lysosomal glycogen storage and finally to an impaired cellular function. The effect of glycogen accumulation on cell function becomes notably effective in muscle cells, in which it compromises contractile activity. As a consequence muscle weakness is one of the predominant clinical features in patients with Pompe disease. A major focus of the workshop was dedicated to the clinical spectrum and natural course of the condition, including unusual clinical presentations and diagnostic pitfalls. It became very clear that Pompe disease is a disorder in which severity, age at onset, rate of disease progression, and extent of organ involvement can vary significantly from individual to individual. Patients present a continuum of clinical phenotypes with a severe infantile form with cardiomyopathy and early death forming one end of the spectrum, and a mild muscle weakness without any cardiac involvement and a normal life expectancy forming the other end of the spectrum. In general, the later the symptoms appear, the less severe the disease will be. But age of onset cannot always be correlated with disease severity as even milder patients can present with motor delay and weakness in early childhood and some adult patients with late onset can rapidly develop severe complains. At present the residual enzymatic activity seems to correlate best with disease progression. The less the enzymatic activity the worse is the clinical course of the disease. Despite the fact that muscle is the most severely affected tissue and most of the adults with Pompe disease present with limb girdle and respiratory weakness, there have been a few reports with involvement of the cerebral vessels in the brain. It is too early to conclude whether this observation is of diagnostic relevance. The heart does not seem to be involved in adults with Pompe disease.

Diagnostic markers that can help to indicate Pompe disease, are an elevated serum creatine kinase activity (CK), lactate dehydrogenase (LDH) and transaminases as well as tetrasaccharides in serum und urine. An air dried blood film stained with periodic acid Schiff's reagent (PAS) might show lymphocytes with glycogen positive vacuoles. A muscle biopsy with signs of a vacuolar myopathy and glycogen storage is indicative for Pompe disease but a normal muscle biopsy in milder patients does not rule out the condition. Muscle imaging might be helpful to select the muscle for a biopsy. Magnetic resonance imaging (MRI) and computer tomography (CT) investigations have shown that muscles of the trunk and the hamstrings are more severely affected in adults with Pompe disease than the femoral quadriceps or distal muscles. The measurement of enzymatic activity in fibroblasts is currently the gold standard for the diagnosis of Pompe disease, but enzymatic activity can also be reliably measured in muscle tissue, lymphocytes and, depending on the method, in mixed leucocytes or dried blood spots. The diagnosis of Pompe disease can finally be confirmed by mutation analysis. The consortium came to the conclusion that some of the proposed screening tests for Pompe disease have still to be validated but the use of dried blood spots looks very promising.

The assessment of patients with Pompe disease should include manual muscle testing using the scale established by the Medical Research Council (MRC scale) and tests for muscle function (e. g. 10 m walking). Furthermore, the lung function of patients should be tested in an erect and a supine position twice a year. A drop of the vital capacity > 20% indicates diaphragmatic weakness. Respiratory management plays a fundamental part in the care of Pompe disease whereas dietary therapy has been of limited benefit to the patients. For future clinical trials it will become more and more important to also apply quantitative muscle tests (e.g. dynamometer), disability scales and quality of life measurements. The workshop participants have established diagnostic algorithms for the severe infantile form ('classical' Pompe disease) of the condition, the juvenile form and the adult form. Future tasks for the consortium will focus on the preparation and monitoring of clinical trials for enzyme replacement therapy.

A summary of the results of the workshop has been presented at the Myology 2005 Meeting in Nantes, May 2005

An extended report of this meeting will be published in Neuromuscular Disorders.

This workshop was organised by Prof. V. Straub (Newcastle, UK) and Dr. A. van der Ploeg (Rotterdam, The Netherland). 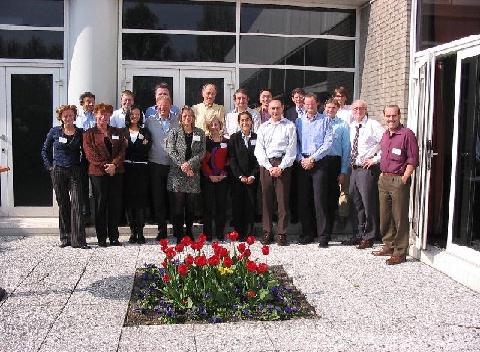