Duchenne muscular dystrophy (DMD) is a severe muscle wasting condition with onset in early childhood, progressive disability and reduced life expectancy. It is caused by errors in the DMD gene that lead to the failure to produce an essential muscle protein called dystrophin. Most of these errors are deletions, i.e. a portion of the gene is missing. Recent laboratory studies have shown that the addition of small molecules named antisense oligonucleotides to cultured patient muscle cells, and their injection into muscles of a mouse model for the disease can restore the production of the protein dystrophin. Although this is a temporary effect, it improved the structure of the patient cells and mouse muscle. It is therefore hoped that a similar approach, if effective in people, would also be able to slow down disease progression in DMD.

A number of groups are now going to take these observations into clinical trials. In particular 2 European groups, one in the Netherlands and one in the United Kingdom, are planning to perform trials in individuals with DMD to assess if this approach is safe; and if dystrophin production can be restored in a single injected human muscle. Additional laboratory studies are also ongoing as part of the research plan to improve the possibility of future systemic delivery of the antisense oligonucleotides (for example intravenously) instead of direct injections into muscle, as this is the kind of route that would be more clinically useful.

The scope of this workshop was therefore for these two European groups to discuss in detail the procedures that will be followed in the two planned trials so that efforts could be combined in order to maximize the information obtained. In addition the workshop was attended by experts in this field from other countries, and by experts in related fields who had previous experience of using antisense oligonucleotides to treat other disorders.

As with the development of any new drug, ensuring that the product is going to be safe at the dose that will need to be used is a very important issue, and one that cannot be rushed. However, collaborative strategies to tackle several practical and regulatory aspects related to the two planned trials were discussed in order to ensure that both groups could move forward together. Sharing the burden and insights of the extensive safety and efficacy testing of the reagents will mean that the trials can be completed sooner, and plans to share data generated in the two studies means that the results will be optimally comparable between the two groups. All parties also agreed to form an International Consortium on Antisense Oligonucleotides in Duchenne muscular dystrophy. The need for good and standardized patient information about the planned study was highlighted, and this will be developed and disseminated via the ENMC website.

An extended report of this meeting has been published in Neuromuscular Disorders.You can access the publication by clicking on the following link here. 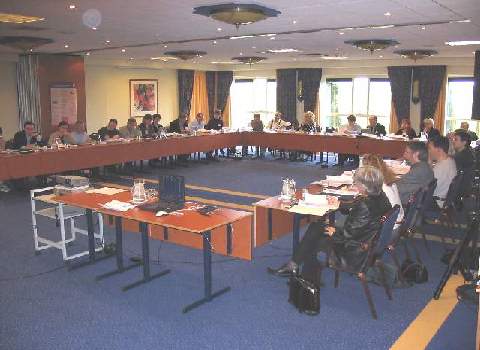