News
You are here: Home / Implementation of European Registry of ALS

Aim of the meeting

The aim of the meeting was to implement a database for the collection of relevant prospective information on patients with amyotrophic lateral sclerosis (ALS) from the participating countries. The data collection will be performed pursuing two major objectives: 1. To recruit a large population-based sample of patients with ALS, obtained by merging the information collected by the existing national and regional registries from Italy, Ireland, England, and Scotland; 2. To collect baseline information on newly diagnosed patients from Spain, Serbia, and other countries where population-based registries are not yet available, to be eventually recruited for observational studies and therapeutic trials.

Every patient to be registered should present upper and/or lower motor-neuron impairment in at least one region and retrospective evidence of progression within the antecedent six months. Eligible patients must then be classified according to the El-Escorial diagnostic criteria and characterized according to selected demographic (age, gender, ethnicity, marital status) and clinical variables (bulbar vs spinal onset, BMI), to be used to identify distinct phenotypes. In addition, cognitive decline should be mentioned when present and classified according to the most recent criteria for fronto-temporal dementia.

A number of core variables have been included to outline the principal demographic and clinical characteristics of the patients along with the features required to define the level of diagnostic certainty (definite, probable, possible, suspected ALS), the and the disability level. A list has been also included of the biological material (CSF, blood, nerve & muscle biopsy, autopsy). The database will be accompanied by a guide which will explain in simple terms the modalities of collection of each variable. The structure of the database consents storage and retrieval of any information subjected to change or to variable interpretations. Any change will be saved along with the date of change. The variables subjected to time-dependent changes (eg, El Escorial categories) will be recorded with the presumed date of change.

The modalities of data collection will be tested with the first cases to be registered.

Confidentiality and privacy will be preserved adopting the following measures: 1. Providing each patient with crypted codes; 2. Obtaining an informed consent from patients; 3. Writing a newsletter to be periodically disseminated through the web; 4. Identifying a strict number of persons who are entitled to have access to the database and examine the individual patient data; 5. Adopting severe measures to prevent access to data by non-authorized persons.

A Steering Committee has been formally elected, represented by the coordinators of the existing registries (Beghi, chairman; Chiò, Hardiman, Logroscino, Mitchell, Swingler), by a statistician (to be appointed) and by a genetic epidemiologist (Traynor). Other persons have been included in the European registry as members (Esteban, Stevic). A data processor has been also identified (Millul) who will verify the completeness and the quality of the recorded information and who will monitor the registration procedure. The members of the steering committee will have access to the recorded data and will exert a control on every scientific product prepared as a group by the EURALS members. Individual members may disseminate their national data with proper disclosures. The entire procedure for the activation of the European registry will conform to the EU directives.

Validation of the quality of data registration

Provided that every participating country may adopt differing strategies for case ascertainment (which depend on the peculiarity of the national or local health care system) and that the similarity in the incidence rates is indirect evidence of an almost complete case identification, a strategy must be adopted to test the reliability of data registration. Accordingly, each national controller will undergo a validation process. The clinical information obtained from a number of cases to be registered will be transferred by the caring neurologist to an ad-hoc semi-structured form to be used by each controller to transfer the information into the database. The latter data will serve as the basis to test inter-rater reliability.

A population-based case-control study will be the first research project of the members of the EURALS. The principal aim of the study will be to test the hypothesis that sustained physical activity in susceptible, whether or not associated with enduring/professional sports and/or trauma, is a risk factor for ALS. This hypothesis will imply the identification of genetic susceptibility through DNA sampling and correct quantification of physical activity (using standardized quantitation of metabolic units). Enduring/professional sports will be noted as such and accompanied by years of activity. Trauma will be registered only if leading to medical intervention with indication of any eventual complication. A 1:2 case-control ratio will be selected. Cases and controls will be age and sex-matched. The study design will be defined in a written protocol, which will be prepared in the next months and submitted for publication in a scientific journal.

They will include parallel studies and methodological reports. The parallel studies (to be defined according to specific protocols) will include twin studies, a systematic review of the major risk factors for ALS, and a study of the correlation between ALS and selected occupational exposures. The study protocols will be submitted to funding agencies (E.U., N.I.H.) and private institutions as grant proposals in the next few months.

A full report of this meeting is published in Neuro Muscular Diseases. (pdf) 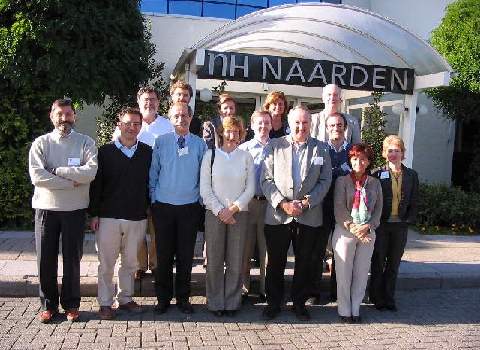