The ENMC Consortium on Congenital muscular dystrophy (CMD) held its 9th meeting in Naarden during the weekend of the 21st-23rd January 2005. It was attended by 23 participants from 9 countries, including France, Germany, Japan, Italy, The Netherlands, Spain, Turkey, United Kingdom and USA. The participants were basic scientists with biochemical, cell biology and molecular biology background, and clinicians and muscle pathologists, all sharing an established expertise in neuromuscular disorders or in muscle cell biology.

Congenital muscular dystrophies (CMD) are a heterogeneous common group of disabling neuromuscular disorders usually inherited as autosomal recessive conditions. Affected children present with muscle weakness and hypotonia at birth, or within the first six months of life and motor development is delayed. The severity and progression of the disease is very variable and dependent on the disease subtype. Brain involvement in the form of mental retardation and abnormal formation of different parts of the brain is a feature of several forms of CMD.

A substantial advance in our understanding of CMD derives from the identification of novel genes responsible for their development. Currently mutations in 11 genes have been identified, and recent classifications of CMD take into account the primary metabolic defect and/ or the subcellular localisation of defective proteins. The present meeting focused on 2 separate groups of CMD syndromes characterized by deficiency in proteins located in similar cellular structures known as the Endoplasmic Reticulum (ER) and the Golgi apparatus. While pathogenesis of some of these conditions is different, this workshop focused on better understanding the localisation and function of these cellular structures during different stages of muscle maturation. One session was therefore devoted to general cell biological aspects of the ER and the Golgi apparatus in muscle; this was followed by a session focused on Rigid Spine Syndrome, a condition due to mutations in the Selenoprotein N, an ER resident protein. The remaining sessions were all devoted to the further characterisation of 5 forms of CMD due to mutations in putative or demonstrated glycosyltransferases (i.e. proteins involved in adding sugar to dystrolgycan), proteins which are localised in either the ER or the Golgi apparatus, or both.

A remarkable widening of the spectrum of the conditions due these 6 gene defects was presented by various participants, together with novel data regarding the spectrum of the pathological changes in muscle and brain. A number of likely novel conditions in which the primary genetic defect is not known yet were presented. Collaborative diagnostic strategies were discussed, together with novel therapeutic approaches to animal models. A number of collaborative studies were agreed.

An extended report of this meeting has been published in Neuromuscular Disorders. Please click here to view the full report. 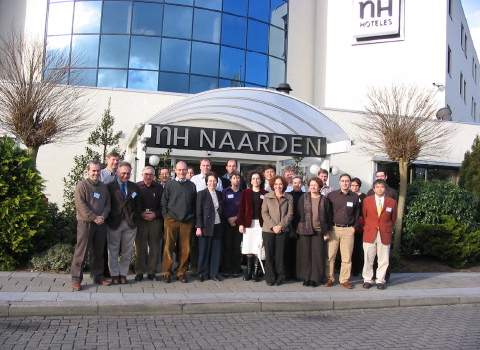