Twenty-six participants from Belgium, Canada, France, Italy, the Netherlands, Sweden, the UK and the USA met in Naarden, the Netherlands, on 3rd-5th January under the auspices of the European Neuromuscular Centre Clinical trials unit. The participants at the meeting comprised the steering committee of the ENMC/ Muscle Study Group on development of trials in DMD and members of various working groups involved in developing aspects of the trial protocol. The meeting was a follow up of the124th ENMC workshop held in April 2004 at which the initial plans to establish a trial of corticosteroid dosage regimes in DMD were made, and following which patient information material on the use of steroids in DMD was generated.

Plans to submit an application for a planning grant to implement a randomised controlled trial of corticosteroid dosage regimes are well advanced. Investigators from 14 countries have expressed an interest in joining the trial. The basic protocol was discussed. As the unresolved clinical question is about the relative benefits and side effects of different steroid dosage regimes over the long term, it was decided to test four regimes (0.75mg/kg/day prednisone, 0.9mg/kg/day deflazacort/ 0.75mg/kg/day prednisone 10 days on and 10 days off and 0.5mg/kg/day prednisone) over a three year period initially with the intention to have in total a 10 year period of follow up. Children with a confirmed diagnosis of DMD around the age of diagnosis or shortly thereafter (4 to 7 years old) will be recruited and randomised to one of the four arms of the trial. In order to ensure a high degree of clinical relevance a primary outcome measure related to muscle function (the ability or time to get up from a lying position) was chosen as a surrogate for the functional milestone of ultimate interest: the loss of ability to walk independently, which will be the primary outcome measure for the longer follow up period. Other functional outcomes including respiratory function will also be measured. Side effects will be monitored and managed essentially according to the table presented in the last workshop report, and working groups will generate standardised information for other areas of management including physiotherapy support, dietetic advice, advice on the management of behavioural problems, etc. which will be made available through the ENMC website.

Three areas were addressed in more detail. The first relates to issues of health services research: quality of life, health economics and caregiver burden. This trial provides a unique opportunity to collect data on these areas across a broad group of children, and choice of the most relevant instruments is the focus of a working group led by Michael Rose. The second area, of bone protection, is led by Doug Biggar and Roz Quinlivan. As the effects of steroid use on bone health is an area of major concern, a protocol is under development to monitor this carefully during the trial. Finally, John Bourke is leading a group to study the effects of the steroid regimes on cardiac function. All of these discussions will continue after the workshop through electronic forums hosted by the ENMC.

It is important to note that because of the scale and of complexity of the planned trial, this will not start for at least another 18 months. It is not appropriate for treatment with one of the proposed steroids regimens to be withheld from DMD patients in the meantime. 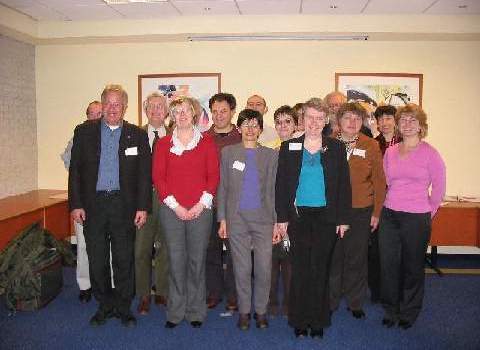