News
You are here: Home / Outcome Measures and Treatment of Spinal Muscular Atrophy

The ENMC consortium on Outcome Measures and Treatment of Spinal Muscular Atrophy held its 1st workshop in Naarden, the Netherlands during the weekend of the 11-13th February 2005. It was attended by 31 participants from Belgium, France, Germany, Italy, Poland, Spain, Swizerland, Turkey, the Netherlands, the United Kingdom, and the USA, and included 3 patient parent representatives. The meeting opened with an overview on the recent knowledge on pathogenesis and pathophysiology of spinal muscular atrophy (SMA). This was followed by discussion on previously performed clinical trials and past experience that could be of help for designing future trials.

The second day was focused on the natural history, of how SMA progresses in the mild, moderate and severe forms of SMA and means of measuring muscle strength and motor function. The importance of having a uniform standard of care in the follow-up of SMA patients was also discussed not only because of the obvious implication for the health of SMA patients, but also because lack of uniformity might indirectly affect both the outcome of future trials.

The outcome measures of future therapeutic trials for patients affected by SMA type I, type II, or type III were discussed in detail; this included functional scales, strength measurements, standards of care for respiratory and feeding complications, quality of life and caregiver burden questionnaires. The state of the art regarding the use of surrogate biological markers was also discussed, and in particular the fact that the monitoring of the full length SMN transcript or of the SMN protein obtained from white blood cells is not sufficinetly robust for its use in therapeutic trials at the moment.

Future collaborative work on trials of valproate in the three different forms of SMA was discussed. A task force to harmonise outcome measures was agreed. A separate task force will prepare guidelines on standards of care. The European effort will be shared with the American SMA organizations. The Workshop agreed to support the Indiana University SMA register data base. Throughout the Workshop ethical considerations were paramount and the parent patient representative input was highly valued.

We thank the Jennifer Trust for SMA (UK) for generous support to make this Workshop possible.

An extended report of the meeting has been published in Neuromuscular Disorders. Please click here to view the full report. 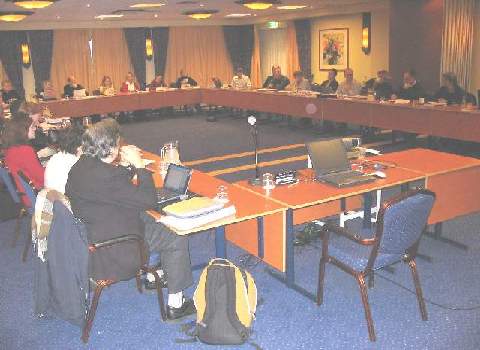