This workshop was co-sponsored by the Myositis Support Group, United Kingdom

What was the aim of the workshop?

The aims of the workshop were to;

After exchange of knowledge, studies and a broad discussion the following was established:

By combining clinical and basic scientists, and a range of diseases / models / cellular systems, we hoped to provide a platform for the sharing of ideas, reagents, animal models, and to fertilise novel hypotheses and open new avenues of research into these diseases for which there are as yet no forms of therapy. This workshop was the first step in generating a strong working group that is now in a position to lobby and/or bid for future EU Framework research funding, or other such calls.

Specifically the workshop recognised the difficulties in correlating the specific genetic alteration in the patient with the actual disease severity. It was agreed that better diagnostic tools were needed to assess disease severity in patients and model systems, including detection reagents to look at both the amount and the enzyme activity of the affected gene product. Considerable discussion also centred on the idea of dystroglycan as a messenger, delivering signals from the outside to the inside of the cell. The nature of the connection to the outside of the cell, the precise signal pathways activated, and the consequence of the signal generated for the cell – survival, growth, death. The current state of potential therapies including virus-mediated gene replacement and small molecule therapeutics were discussed. Finally a view from a carer of their perspective of dystroglycanopathy and the current patient registry schemes was also considered. 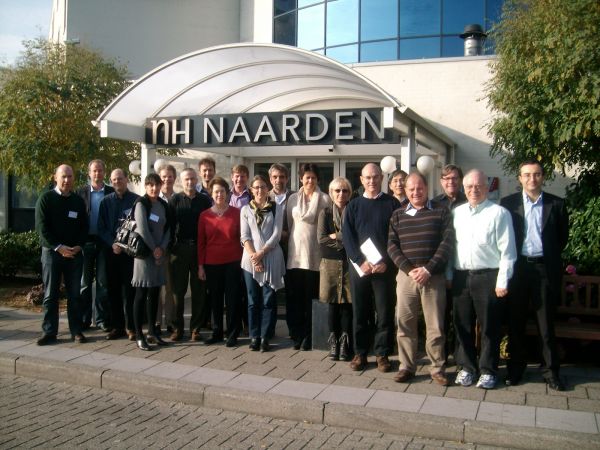 The ENMC hosted a group of experts on Congenital Myasthenic Syndromes (CMS). CMS are inherited disorders in which the safety margin of the neuromuscular transmission is compromised by one or more specific mechanisms. CMS are caused by various genetic defects of neuromuscular junction proteins. Since the last ENMC workshop on CMS in 2004 (126th workshop), additional CMS genes have been identified, of which AGRN, DOK7 and GFPT1 were the focus of discussion at the 186rd workshop. As a consequence, the total number of patients with CMS and the diversity of clinical phenotypes have further increased. The workshop discussed the underlying pathophysiology, animal models, current and future approaches to diagnosis, management and therapies of CMS. Furthermore, the group identified gaps in current knowledge and made plans for future collaborative efforts. The workshop was attended by 22 participants from 7 countries (Bulgaria, France, Germany, Spain, Switzerland, United Kingdom, U.S.A.). Participants included scientists, clinicians and a patient representative. CMS patients are often responsive to treatment with different medication, but early and correct diagnosis remains challenging. The awareness and understanding for CMS among health care professionals and the lay public requires further attention. 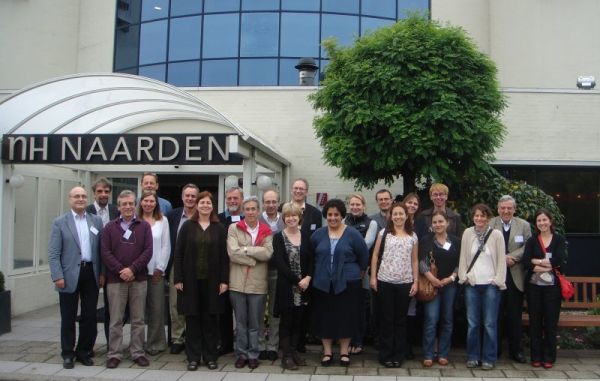 The aims of the workshop were to discuss progress towards the use of stem cells to treat muscular dystrophies and define work that needs to be done, to address the following issues:

The workshop provided an invaluable opportunity to bring together many parties all working on the same problem but with different tools. It provided a platform for participants to report new, often unpublished findings, to highlight problems and how they have been overcome and to share expertise in reagents and animal models.  The main achievements included a decision to put standard protocols for the preparation and identification of different stem cell types and methods for their preclinical testing onto a website, to ensure that different groups achieve comparable results.

We also discussed problems related to the fact that muscle stem cells from different muscles or patients, that appear to be the same, are not always identical and that they may change their properties as they are expanded in culture ready for transplantation.

It is not possible to do a clinical trial using stem cells that is placebo-controlled; design of the trial and methods to measure efficacy of stem cell transplantation should be carefully planned.  The outcome of two ongoing stem cell trials – one with systemically-delivered and one with locally-delivered cells – will be known next year. A significant development made at the meeting was made after hearing from DMD patients that maintenance or restoration of function of a few small muscles, e.g. in the hand, would represent a significant improvement in the quality of life. To this end, the group discussed possibility of extending current work to develop a trial in which small muscles in the finger could be transplanted with myoblasts.  It is however very important to manage the expectations of patients and families and to ensure that good quality, easily-accessible information on stem cell treatment for Duchenne muscular dystrophy is available on the internet.  We plan to hold further meetings of this consortium to advance the possibility of stem cells to treat muscular dystrophies. 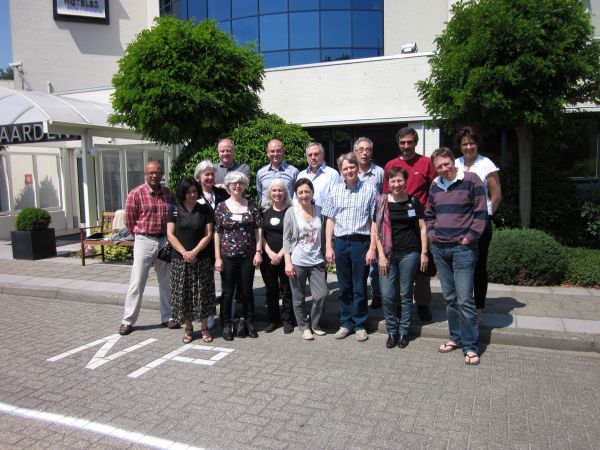 The 184st ENMC workshop titled “Pain and fatigue in NMD: prevalence and management” was held in Naarden, the Netherlands, 20-22th May 2011, with representatives from Western and South Europe and USA.

What was the aim of the workshop?

The aim of the workshop was to establish definitions for pain and fatigue in neuromuscular disorders and possible measurement instruments. This will guide the management approaches.

After exchange of knowledge, studies and a broad discussion the following was established:

A full report is published in Neuromuscular disorders (pdf) 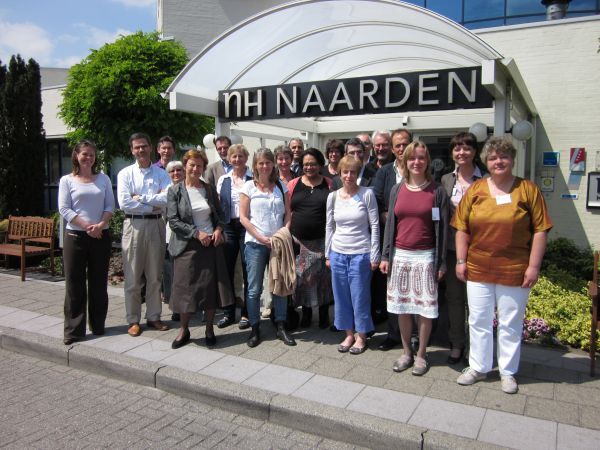 The ENMC workshop on outcome measures and clinical trials in CMT was very successful.
The main aims of the workshop were:

Achievements.
1)     During the workshop we worked on how to design potential outcome measures in rodents and determine which of these were subject to change over time. At this point combining these into a modified version of the CMT Neuropathy Score (CMTNS) or evaluation tool for animals is being considered. A working group to address these issues has been created.

2)     The group agreed to formalize as a CMT animal model consortium to carry forward the aims of the meeting
3)     An animal registry will be created and maintained
4)     Suggestions of ideal transgene design for animal disease models of CMT were proposed
5)     Suggestions on ideal standardized approaches for neurophysiological evaluation of CMT animal models were agreed upon and novel EPS approaches to be evaluated in the future were discussed
6)     Suggestions on specific nerves to analyze in CMT models were made as well as specific procedures to analyze the nerves.

An approach to preclinical trial design was presented and discussed

A full report will be published in Neuromuscular Disorders. 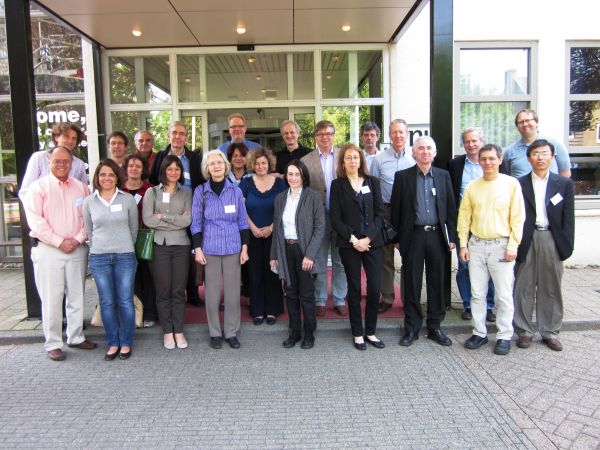 19 scientists and clinicians from Europe, the United States and Australia convened between the 15th and 17th of April 2011 in Naarden, the Netherlands, for the ENMC workshop on RYR1-related myopathies, namely Central Core Disease (CCD), Multi-minicore Disease (MmD) and other muscle conditions related to changes in this gene.

The skeletal muscle ryanodine receptor (RYR1) gene plays an important role in normal muscle function and over recent years disturbances of this gene have emerged as one of the more common causes of neuromuscular disease. The first part of the workshop focused on the clinical characterization of these conditions and description of typically associated muscle biopsy features. Subsequently, experimental models of disturbed ryanodine receptor function were presented and secondary RYR1 alterations, a recently emerged important mechanism in the development of other neuromuscular disorders, were discussed. The last sessions of the workshop focussed on mechanisms of RYR1-related disorders potentially amenable to treatment and the development of patient registries in preparation for future therapeutic studies.

A full report of this workshop is published in Neuromuscular Disorders (pdf). 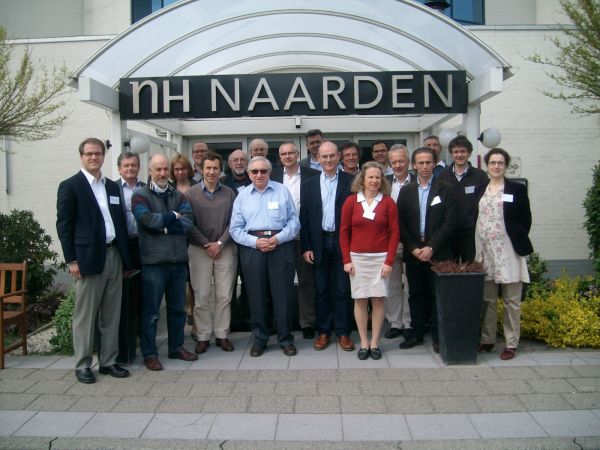