The 255th ENMC workshop on Muscle Imaging in Idiopathic Inflammatory myopathies was divided into two sessions: first part (virtual) in January 2021 and the second to be held as hybrid meeting in The Netherlands during from 9-10 September 2022.

Imaging plays an important role in the diagnostic process in inflammatory myopathies. Despite the advantage of selecting a suitable site for a muscle biopsy, visualization of muscle volume and its capability to differentiate active inflammation from chronic damage, there is still no generally accepted recommendation for the performance and evaluation of the particular imaging methods. The organizers of the meeting invited the same experts who attended the previous meetings in January 2021 to define recommendations concerning main technical parameters and propose a universally applicable evaluation system. In order to streamline the discussion a questionnaire was distributed prior to the meeting.

The workshop started with an introductory presentation on the applications of MRI, followed by discussion of the results of the questionnaire which was distributed amongst the workshop participants after the first part in January 2021. There were questions regarding the indications of MRI and other imaging modalities, in particular ultrasound. For diagnostics, as a biomarker in clinical practice and as an outcome measure in research, i.e. in natural history studies and clinical trials. MRI appeared to be the modality furthest along. Subsequently, the results of the questionnaire about the use of MRI/ultrasound protocols, concrete MRI parameters and methods recommended for evaluation were discussed.

Also the responses to topics of imaging as a tool in the differential diagnosis based on pattern recognition, its use in the evaluation of a treatment effect and the correlation to other assessment methods of muscle involvement were presented.

With this as basis the participants separated into break-out groups to draft recommendations based on the previous sessions, mention current and potential future technical developments, as well as drafting a research agenda for the topics that are still in need for evaluation.

Due to the still uncertain Covid situation the workshop was held as hybrid meeting, but despite this fact, the discussions were very interactive and fruitful. Following this, the group work was presented and discussed in the plenary session for a final discussion of the recommendations. The next step will be the drafting of an ENMC reference paper, which helps clinicians, radiologists and patients around the globe to use the available imaging techniques in a standardized manner.

A full report will be published in Neuromuscular Disorders (PDF) 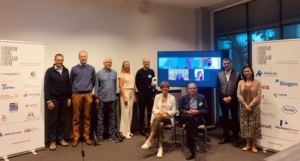 Translation of this report:

The 255th ENMC workshop on Muscle Imaging in Idiopathic Inflammatory myopathies was originally scheduled for 2020, but due to COVID-19 worldwide pandemic situation, the workshop was postponed and finally divided into two sessions: first part (virtual) in January and the second to be held in The Netherlands during fall 2021.

Idiopathic inflammatory myopathies (IIM’s) can be subdivided in different categories: dermatomyositis (DM), immune-mediated necrotizing myopathy (IMNM), antisynthetase syndrome, which is in fact an overlap syndrome, and inclusion body myositis. Previous ENMC workshops have focused on consensus on diagnosis and management of DM and IMNM.

Muscle imaging plays an important role in the diagnostic process in IIM’s and might also be helpful for monitoring disease progression which serves natural history studies and clinical trials. Despite the advantage of visualization of large muscle volume, its capability to differentiate active inflammation from chronic damage, there is still no generally accepted recommendation for the performance and evaluation of the imaging modalities.

The meeting started with sharing the expected deliverables and main goals of the meeting. In particular, it was emphasized (with respect to individual technical capabilities of different workplaces), that the resulting protocol should rather be a set of good options that could be widely followed.  Subsequently, an overview on the current classification of IIMs including the clinical presentation and diagnostic criteria was given, followed by an overview of published qualitative and quantitative magnetic resonance imaging (MRI) protocols, which allow for detection inflammation (disease activity) or atrophy (loss of muscle tissue) and fatty replacement (chronic damage). Finally, in this general session, a review of established scoring systems showed how significantly the individual scoring methodologies differ across published studies.

The second day opened with presentations of the two patient representatives, emphasizing the close association of the ENMC with patients and patient organizations and the needs of patients with respect to muscle imaging. Both patients expressed their wish that muscle imaging turns out to be a reliable outcome instrument, its potential being enormous since it is non-invasive, painless and widely available.

The next talks focussed on different myositis subtypes and their patterns on MRI or other imaging modalities, e.g. in patients with IMNM fatty replacement is seen early and edema is widespread, pattern of involvement is not so characteristic, while pattern recognition in inclusion body myositis (IBM) patients is already used. Additionally, the importance of visualization in juvenile DM was underscored showing that inflammation is much more widespread as compared with the clinical findings. Another focus was on MRI as a biomarker to be used for monitoring of progression or in clinical trials. The preferential use of quantitative imaging methods including the technical difficulties was also discussed. The session was closed with a talk about the usefulness and the limitations of DEXA*, which might be a supplementary imaging method detecting lean body mass in addition to bone density.

The third day focused on other imaging modalities and correlation of imaging and other assessment methods of muscle involvement, such as muscle strength and muscle function in adults and children and pathological findings in a muscle biopsy. Novel applications of MRI bring additive useful information about muscle condition and the course of IIM, but their exact role is yet to be determined. Use of PET (positron emission tomography) and SPECT (single-photon emission computerized tomography) – both methods use a radioactive drug (tracer) to show the activity of tissues and organs within the body - for the diagnosis of myositis is rather limited, but both methods offer the advantage of also detecting malignancy, risk of which is increased in IIM’s. Ultrasound is a promising method especially in patients with IBM, where involvement of the m. flexor digitorum profundus (a forearm muscle) can be helpful for the diagnosis.

The third day ended with two talks about imaging of dysphagia (difficulty swallowing) and cardiac and lung involvement which are frequent complications in IIM’s. Impressive pictures of dysphagia on real time MRI were shown. Moreover, this not yet routinely used method is capable of detecting weakness of the diaphragm, responsible for dyspnoea (shortness of breath) in many IIM patients. Cardiac MRI has already been used in clinical practice, although the examination remains difficult to access, and the clinical implications are as yet not clearly defined.

The first virtual part of the workshop finished with a discussion about the next steps and it was decided that the workshop deliverables will be sorted into rated options. The meeting was experienced as a lively and productive workshop, leading to many discussions in both the chat and during Q&A sessions after presentations, to challenging questions and new ideas.

A final report and recommendations will follow after a next workshop scheduled for October 2021. A full report will also be published after the final meeting in Neuromuscular Disorders. 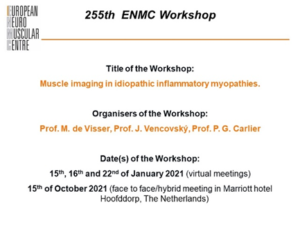 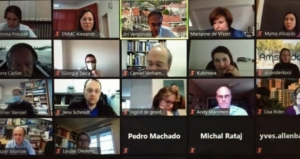 Standards of care for the DysferlinopathiesGenetic diagnosis, clinical classification, outcome measures, and biomarkers...
Scroll to top